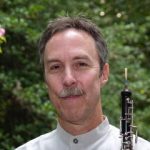 Born into a musical family, oboist Ronald Erler began his musical training with his father and went on to study with Earnest Harrison, Richard White, John Mack and Louis Rosenblatt. Previously on the faculties of Shenandoah Conservatory of Music and Furman University, Ron holds advanced degrees in music education and oboe performance and has received training in arts administration. Additionally, he has served as Personnel Manager of the Washington Chamber Symphony, the Alexandria Symphony Orchestra, the Prince William Symphony Orchestra, the Bach Sinfonia and the Concert Soloists of Washington Chamber Orchestra.

Ron has appeared as soloist with symphony orchestras and touring musical groups throughout the Midwest and the Eastern Seaboard, and has been heard across the country on National Public Radio. He has performed on dozens of recordings, including a NAXOS International CD with the Grammy Award-winning Washington Chorus playing principal oboe with members of the National Symphony Orchestra. Ron currently serves as the principal oboist with the Washington Ballet Orchestra performing at the John F. Kennedy Center for the Performing Arts, and is a working free-lance musician, having played with many of the performing arts organizations and venues in the Washington DC/Baltimore corridor.

Following retirement as principal oboe of The United States Air Force Band and Symphony Orchestra in Washington, DC, (the premiere musical organization of the United States Air Force), with whom he toured and performed in Brazil, Uruguay, Argentina, Panama, Chile, Germany, United Kingdom, France, Belgium, Canada, Mainland China, Japan, and all 50 United States, Ron is a music contractor for his own agency, providing regional music contracting services and representation for professional chamber groups, as well as booking, collaborating and performing with local performing arts organizations.

Ron is married with two grown daughters, and is the proud “Grampy” to four fascinating grandkids. When musical commitments and family obligations allow, he can be found plying the waters of the Chesapeake Bay aboard his sailboat, Water Music.

Ron performs on an oboe built in 1989 by the late Paul Covey, of Baltimore, MD.